Round 1 Review
HOCKEY’S BACK: ROUND 1 RESULTS
It had been so, so long in the making, but Casey Hockey Club was finally back on the pitch on the weekend.
After a pre-season spanning 2019-2021, with last season shut down due to the coronavirus pandemic, the men’s Vic League 2 side took out their frustrations on Melbourne Razorbacks with a comprehensive 6-1 victory. Star striker Bryan Young returned to the club with a bang, slotting a double hat-trick – 4 goals – while veteran Blake Edwards and vastly-improved young gun Nick McPhee rounded out the scorers as the Cannons enter Round 2 on top of the ladder.
The men’s seconds went one better, banging seven past the Razorbacks in a 7-1 result that also puts them on top of the ladder. Former club coach Jason Moult celebrated his 30th birthday in style with a hat-trick, a feat emulated by fellow striker Benny Knight. Pete Jennings was also lively in his return to the club and grabbed himself a goal for his troubles.
It was the perfect game of hockey for the women’s seconds, the girls duking it out with ECHO in a scoreless 0-0 draw in Pennant F.
The men’s Metro B South side showed plenty of fight in coming back from 3-1 down to secure a point against Greater Dandenong Warriors. Newcomer Zafar Azaan acquitted himself well in his Casey debut, scoring one of the goals, as did the speedy Jacko Johnston. Christopher Milk Randall rounded out the scorers with a ‘Scott Daly Special’ off a penalty corner.
The women’s Metro B South side tried hard, but went down 2-0 to a strong Glen Eiroa outfit. The girls will be better for the run after a tough Round 1 clash.
The fourths ensured the men would exit Round 1 undefeated, the dedicated Luke Westendorp taking his opportunity to score the only goal in a 1-1 draw with ECHO.
*The women’s firsts had a bye in Vic League 2.
ROUND 2
WMBS v Mornington, Sat, 12.30pm @ Home
WVL2 v Melton, Sat, 2pm @ Melton
MVL2 v Collegians, Sun, 2pm @ Monash
MVL2R v Collegians, Sun, 3.30pm @ Monash
WPF v Camberwell, Sat, 2pm @ HOME
MMBS v OHA, Sat, 3.30pm @ Haileybury
MMC v BYE
MM45+CSE v Southern Knights, Mon, 8pm, HOME 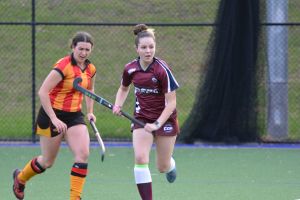