Round 8 Review
Back-to-back wins have buoyed the women’s first team, this one an impressive 6-1 result against Craigieburn.
Veteran striker Tina Horwood had a day out, slotting a hat-trick in the rout, with Tegen Hyland, Jess Rowland and Fiona Young rounding out the scorers.
The VL2 women were the only Casey senior side to taste victory this round, a win that keeps them in the top four.
Pennant F remains in a share of top spot, despite going down to TEM in a 2-1 result, the goal provided by young gun Amy Jamieson.
The Metro B South women fell out of the top four with a 2-0 loss to Glen Eira.
For the first time this year, no team in the men’s unit took home points.
The Men’s firsts tasted their first defeat of the season in a high-scoring affair against Craigieburn.
A Matthew Light hat-trick and a goal to striker Bryan Young were not enough as the potent Craigieburn won 5-4.
With the loss, the men drop to second on the VL2 ladder.
The twos also went down for the first time this season, unable to give Mark Dowel a victory in his 200th game, failing to score as Craigieburn went in twice early.
The thirds were outpointed by Greater Dandenong, 4-2.
The Metro B side had the better of the play early, but allowed Dandenong to strike three goals in succession in a third-quarter purple patch that killed off the game.
Ben Knight crunched a short corner in and Owen Hulland deflected the other goal, set up by some brilliant midfield stickwork from Ben Waldin.
It was a tough day at the office for the Metro C side, beaten 10-1 by ECHO, goalkeeper Murray Anderson given plenty of work in his 200th game for the club.
Anderson was also in action on Monday night when Steve Munro marked his 150th game, but the Masters side was outclassed 5-0 by Croydon Ranges.
The U14s got back on the winners list with a 5-2 win over Waverley.
Yet another hat trick to Thomas Pettigrew was the headliner, as Christopher RIgoni and Leandi Blignaut gave great support, each scoring goals.
U10 Noney celebrated its first win of the season, Xavier Woodcock’s goal the only one that was needed in a 1-0 victory that left the team with plenty of smiling faces.
The U12s had a bye.
Hockey takes a break this weekend for the Junior State Championships. 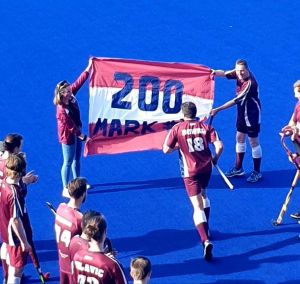