Former Player Amy Lawton
Amy Lawton started her hockey career at Casey, way back in 2010 when she was part of our U9’s.
Now an Olympian with the Hockeyroos, we are very proud to see a former player go on to achieve so much at a young age.
Club Vice President Michael Randall has used proceeds from his book to sponsor Amy for the upcoming Hockey One season.
Well done Amy and good luck 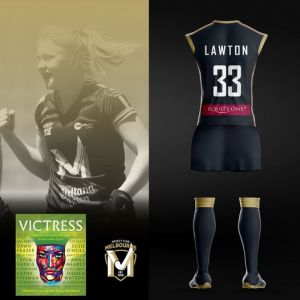 Hockey Club Melbourne with Victress: Women Who Paved The Way in Australian Sport.

The book is an ode to some of Australia’s most cherished female athletes who, not just through achievements in their chosen sport, but through their unwavering conviction and commitment to women’s sport, blazed a trail for their sisterhood.
From legends like Dawn Fraser and Cathy Freeman, to the new breed of powerful sportswomen like Ellyse Perry, Tayla Harris and Ash Barty, each athlete is honoured and celebrated, thanks to Hobart Hurricanes Women’s Big Bash League cricketer Corinne Hall’s unique artistic talents.
Written by Corinne Hall & Michael Randall, they are both excited to be on board with Amy Lawton and HCM.