Round 4 Review
The winning streak remained alive for the men’s Vic League 2 side, thanks to a thrilling last minute solo effort from goal scoring machine Bryan Young.
In a clash with St Bede’s that never reached any great heights, the Cannons opened the scoring through youngster Nick McPhee, but struggled to make further inroads as the home side worked its way into the game.
Turnovers threatened to kill Casey and one resulted in an end-to-end opposition goal that evened the scores.
The last quarter was all Casey, but chances went begging and the teams looked destined to share the points.
That was until the sublime Young plucked an overhead out of the sky, beat three defenders and slotted the match winner, moments before the final whistle was blown.
It was a fitting end to a match where the men celebrated three milestones – Evan Rundell (200 games) Adam Shilliday (150) and Michael Jennings (100).
That’s four wins from four starts under rookie coach Sam Dobrich, made even more impressive by the absence of key man Matthew Light.
The daunting trip to Ballarat proved too much for the undermanned Vic League 2 women, who conceded three goals in the first quarter to effectively surrender victory.
Without the speedy Mikaela Davis and sturdy mid Bron Moult, the Cannons had to come out firing against a strong WestVic side.
That didn’t happen, but the positive out of the match was the way they worked their way back into it, Jess Rowland providing the attacking might with both the goals. The Cannons will look to turn the tables when WestVic make the long trip to Casey later in the season.
The women’s twos fared better, slapping Yarra Valley, 4-1, in Pennant F.
It was a sharing and caring performance for the Cannons who had four individual goal scorers in Tina Horwood, Vanessa Dillon, Teejay Peterson and Emily Noney. The twos are among a cluster of top-four clubs all on 10 points in an even Pennant F competition.
It took a fightback, but the men’s Reserves managed to share the points with St Bede’s.
Despite having the better of field play, Bede’s found the net twice on penalty corners to go up 2-0.
The Cannons were always going to come, though, and goals to Jason Moult and Mark Dowel ensured they would take one point out of the game – and hold onto second spot for now.
Bryce Alards and Jackson Johnston had blinders to help power the men’s Metro B side to a 3-0 win over St Bede’s.
The Cannons had the bulk of the play, but went into the halftime break without a goal.
It didn’t take long, though, the intriguing leftie Johnston knocking an airborne save past the goalkeeper in the first couple of minutes of the second half.
Impressive youngster Matthew Lawler made it two with a precise finish from a tight angle, before Johnston went in again off of a broken play that bamboozled the goalkeeper and defenders. Casey sits top of the ladder after four rounds.
Goals to Hilary Doulton and Shannon Carrigg helped the women’s Metro B side to a 2-2 draw with Collegians, while Jas Sing provided the only goal in the men’s Metro C side’s 9-1 loss to undefeated Greater Dandenong.
Our U14 side had a brilliant season debut, running away with a 10-1 win over Maccabi.
Prime mover Thomas Pettigrew helped himself to a bag of five goals, while debutant Emily Harris fired in a hat trick and Leandi Blignaut added a brace.
In a topsy turvy clash with Frankston, the U12s fought out an honourable 4-3 defeat. Bopanna Prince Achandira, Korben Leask and Alfie Ray were the goal scorers in the tight loss.
Xavier Woodcock scored the goal in a 4-1 loss for U10 Noney, while Cleo Guastella was the goal scorer in U10 Coaster’s 6-1 loss to Maccabi.
Last Monday-week, A nine-player Masters side did a brilliant job to travel to Hawthorn and come away with a 1-1 draw. Jas Singh found the net.
This week is a special one for the club with our Women’s Pink Round raising funds for Breast Cancer Network Australia as we celebrate 300 games for stalwart Melissa Light.
Players will don pink socks and there will be a raffle, sausage sizzle and raffle prizes, with donations going toward breast cancer research and prevention. 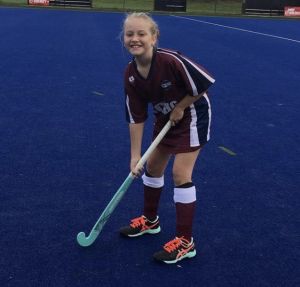 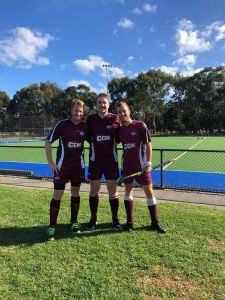